Observations of water bodies in the Luzhsky District: The results of public observations and a seminar on the problems of natural water quality in the Luga River basin.

The quality of water in the Luga River, as well as in wells and springs (in which a large part of the population of the region takes water for drinking) is a actual topic for residents of the Luga region.
Discharges of sewage from settlements and cities, outwash from fields on which excess nitrogen fertilizers are used, manure storage on farms, cesspools - all this creates a biogenic load on natural waters. Excess input of nutrients (mainly nitrogen and phosphorus) leads to eutrophication - water bodies begin to "bloom", water quality deteriorates. Climate change exacerbates the problem and leads to increasing of the number of floods and flooding of territories, which increases the risks of washes from the territories and the intake of nitrogen-containing substances in water bodies.

The main sources of danger for water bodies are ammonium compounds, which then turn into nitrites and then into nitrates. Thus, nitrates are a cumulative characteristic and its determination is suitable for public research. The permissible content of nitrates (MCL) in drinking water is 45 mg/liter. A high content of nitrogen compounds can also be found in the water of wells and springs, which creates risks of diseases, affects on immunity. Nitrites in drinking water are dangerous because they react with human blood, as a result of methemoglobin formation, which cannot carry oxygen, leading to oxygen starvation. Hypoxia causes weakness, impaired well-being, nervous system disorders, heart, kidney and liver. 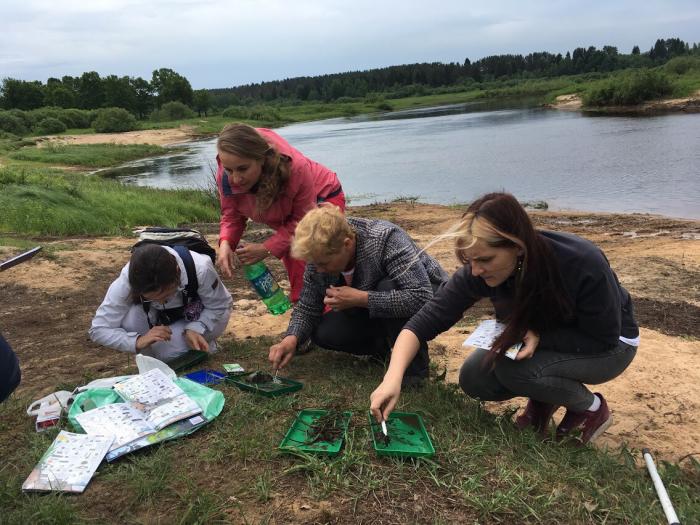 Results of public observations
Participants tested the water on the ammonium ions content, nitrates and nitrites, water rigidity, pH and salt content. We checked the water by bioindication - by observing the composition and number of invertebrate species of the inhabitants of the water body. Sampling was carried out from the Luga River (before and after pollution control facilities), Yashchera River, Swinechnaya river, Obla River, Tesovo river and in the springs of the Luga River, Yashchera River, Obla River and in the village Yam-Tesovo. The absence of nitrogen-containing substances (before and after the pollution control facilities) on the Luga River, tap water in the Tesovskoye settlement), as well as the excess of the MCL in some springs (Turovo village, spring in the village of Yam-Tesovo, well in Luga, Naplotinka River in Luga).

The results of water sampling from wells on the river Naplotinka on the outskirts of the Luga town are exhibitive. This is a popular place in the town, many people come here for drinking water. Interestingly, in this place from three different wells the concentrations of nitrates are different: in the bore hole closest to the road (the most popular among residents) is 50 mg / litre, in the other two wells - 10 mg / litre This example shows how important it is to monitor, and most importantly - to inform the population about the results for understanding that after 100 meters get over they will be able to use clean water. The quality of water in the spring in Turovo (the water in which it is considered to be "holy") disturbed the participants of the trip - the content of nitrates in water is 200 mg / litre, that is, exceeding the MCL by almost 4 times. 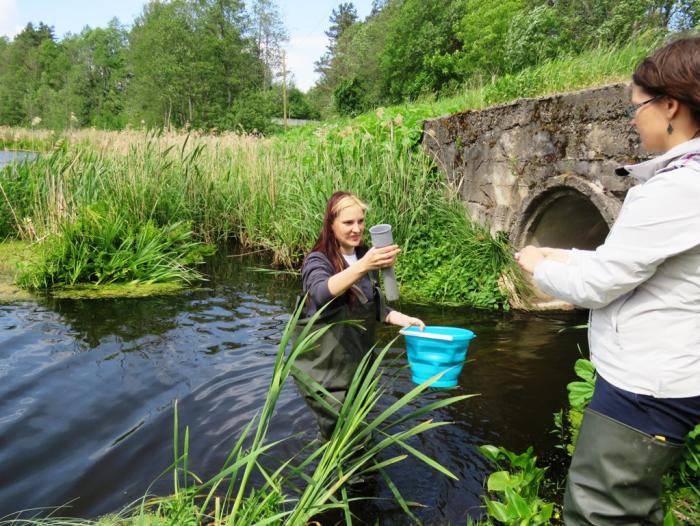 oo
Microplastic in water objects - an invisible threat
In spite of the nitrogen content researches in the water samples, on one of the observation point were selected water samples for the microplastic detection and in addition was used a contamination of water objects with microplastic method of monitoring. The topic on microplastics in water bodies is quite new for Russia, and the scientific community and the public are increasingly interested in it. Learn more about microplastics here: (https://vk.com/microbead)
Taking into account that there are a large number of fishermans in the Luga region, it was very important to find out if there are microplastic particles in the River that accumulate toxic substances in the water and could poison the fish and than - man. Sampling was carried out on the Svinechnaya River, on a site with a rather strong current. The sample shows not just the concentration of particles in a stagnant place, but the total concentration of particles in a River watercourse. The microplastic monitoring technique is easy in use, therefore, residents of the Luga region can use it independently and monitor the dynamics of the number of particles in local water bodies. During the Round table participants of the event watching the striking particles of microplastics of bright colors found in the Svinnechnaya River, and learned about how microplastic effects on living organisms.

ppp
Discussion of the results: What is the next?
After water sampling, participants of the field trip got together at a Round table for discussion on the results of the research. As well as to think what the public can do to make the situation better. Participants consider that it is necessary:
- Examination of the situation with underground sources of drinking water supply pollution in the Luga region,
-Active involvement of social groups in research, close cooperation with governing authorities and scientific institutions,
- Wide amplification of the problem on the pollution of water bodies by biogenic substances information among the local population;
- Development of environmental recommendations for rural residents, villages and gardening territories for handling toilet drains and for agriculture, dissemination of best practices for reducing nutrient loading on natural waters.
- Education on climate change, on the consequences of flooding, and on adaptation measures, including restrictions on farming in flood zones,
- Take into account all the problems identified through public observations in the analysis and description of the general ecological situation in the Luga River basin and in the conclusions on necessary decisions for integrated basin management (an expert document by Ecocentrum)