From water quality and energy saving to microplastics and eco routes: how was the scientific and practical conference of students 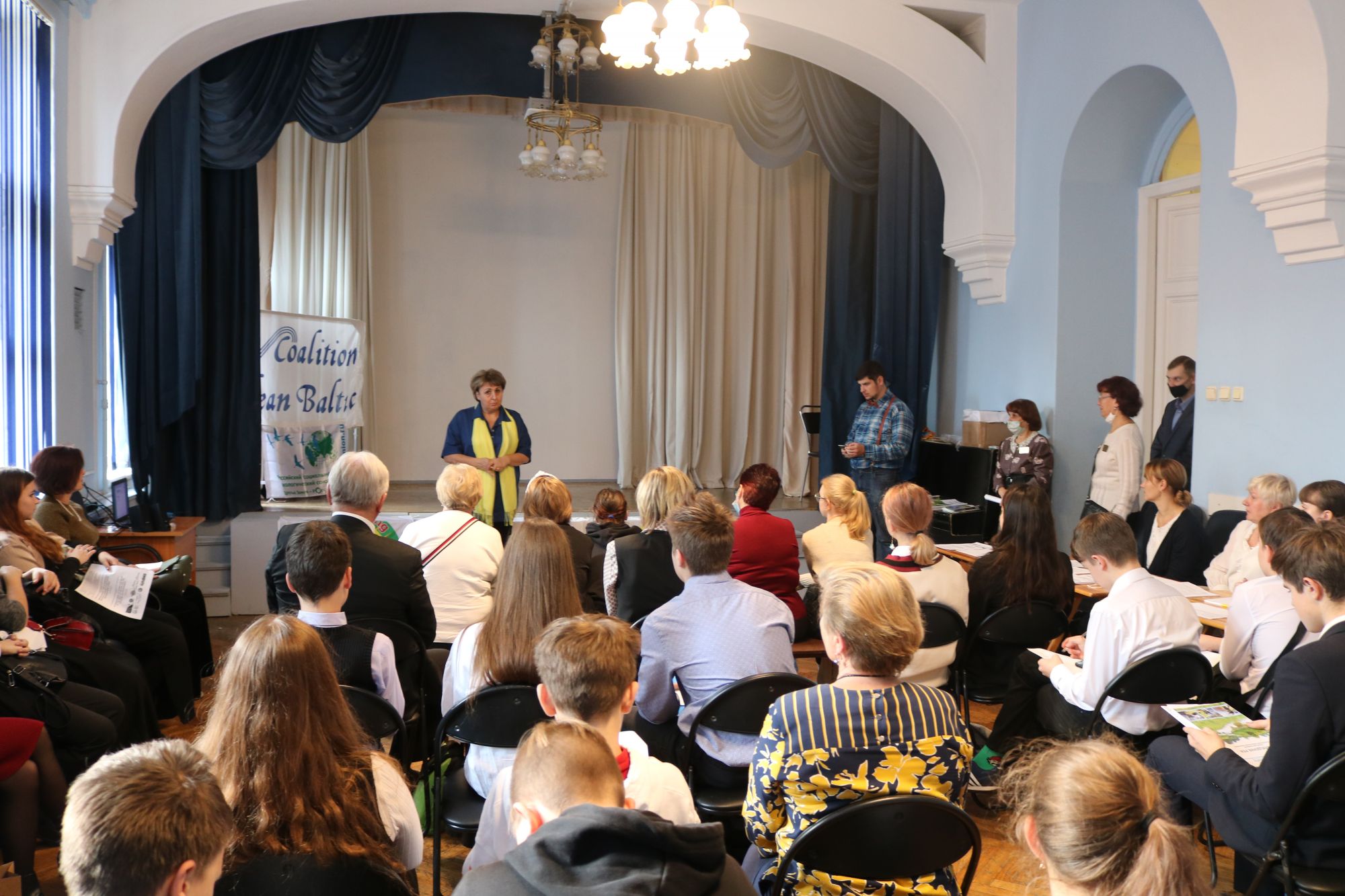 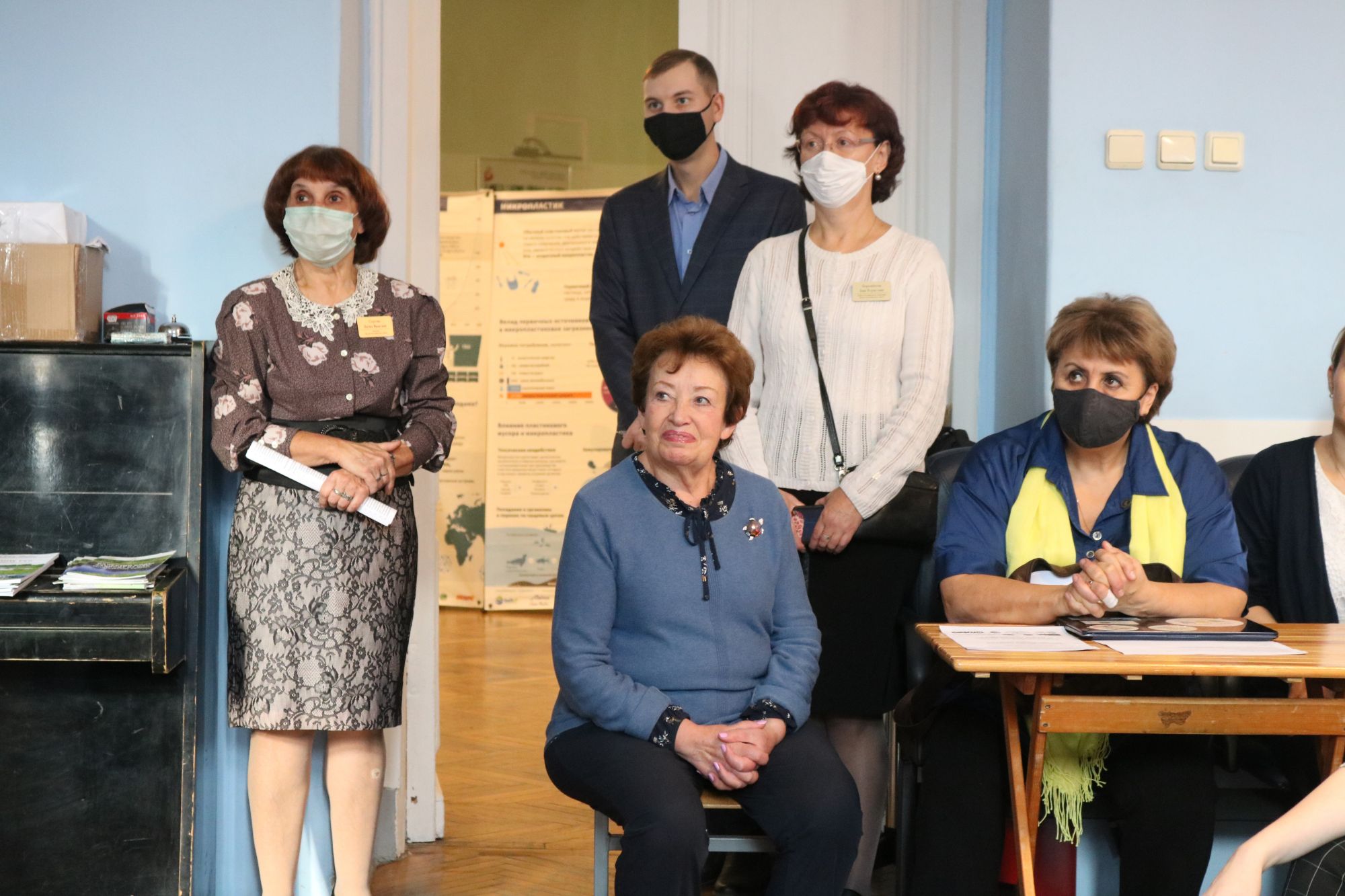 On October 8, 2021, the XXI interregional scientific and practical conference of students "Ecomonitoring of rivers and the coast of the Gulf of Finland and the state of the environment" was held at the Palace of Creativity "At the Voznesensky Bridge". The event was organized by "Friends of the Baltic" and Palace of Creativity "At the Voznesensky Bridge". The partners of the conference were the Department of Education of the Admiralteysky District Administration of St. Petersburg, the International Coalition Clean Baltic, the "Center for Providing Educational Activities of Municipal Educational Institutions of the Lomonosov Municipal District of the Leningrad Region", and the "Krestovsky Island" eco biological center.

Five sections were presented at the conference: "Clean rivers – clean Gulf of Finland", "Environmental monitoring", "Actions for the future. Habitat and human health", "Preserving natural and cultural heritage" and a separate section for online participants (due to epidemiological conditions, not all participants were able to take part in the conference in person).

The conference was attended by 59 students and 37 teachers from 33 educational institutions of St. Petersburg and the Leningrad region. 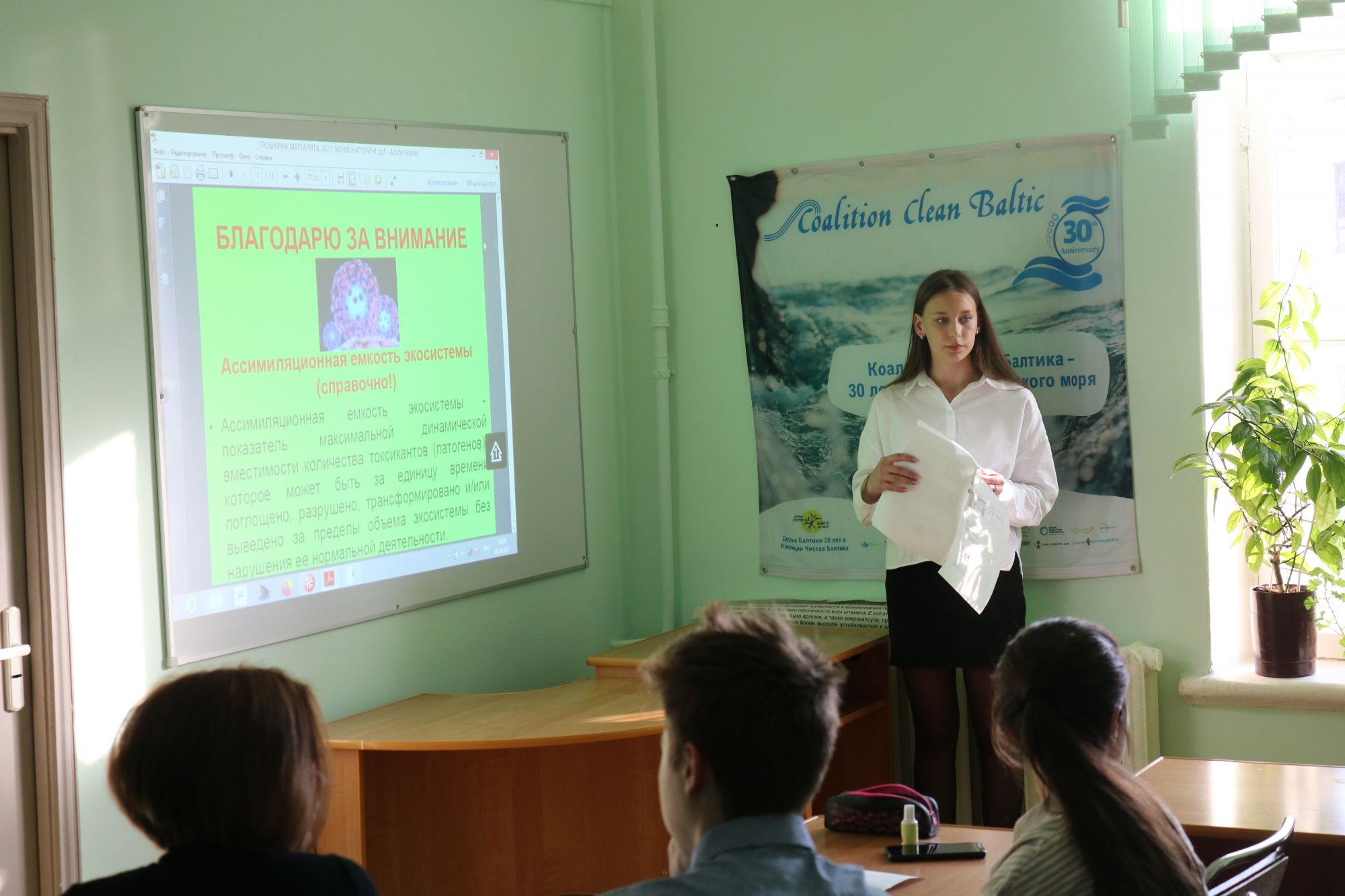 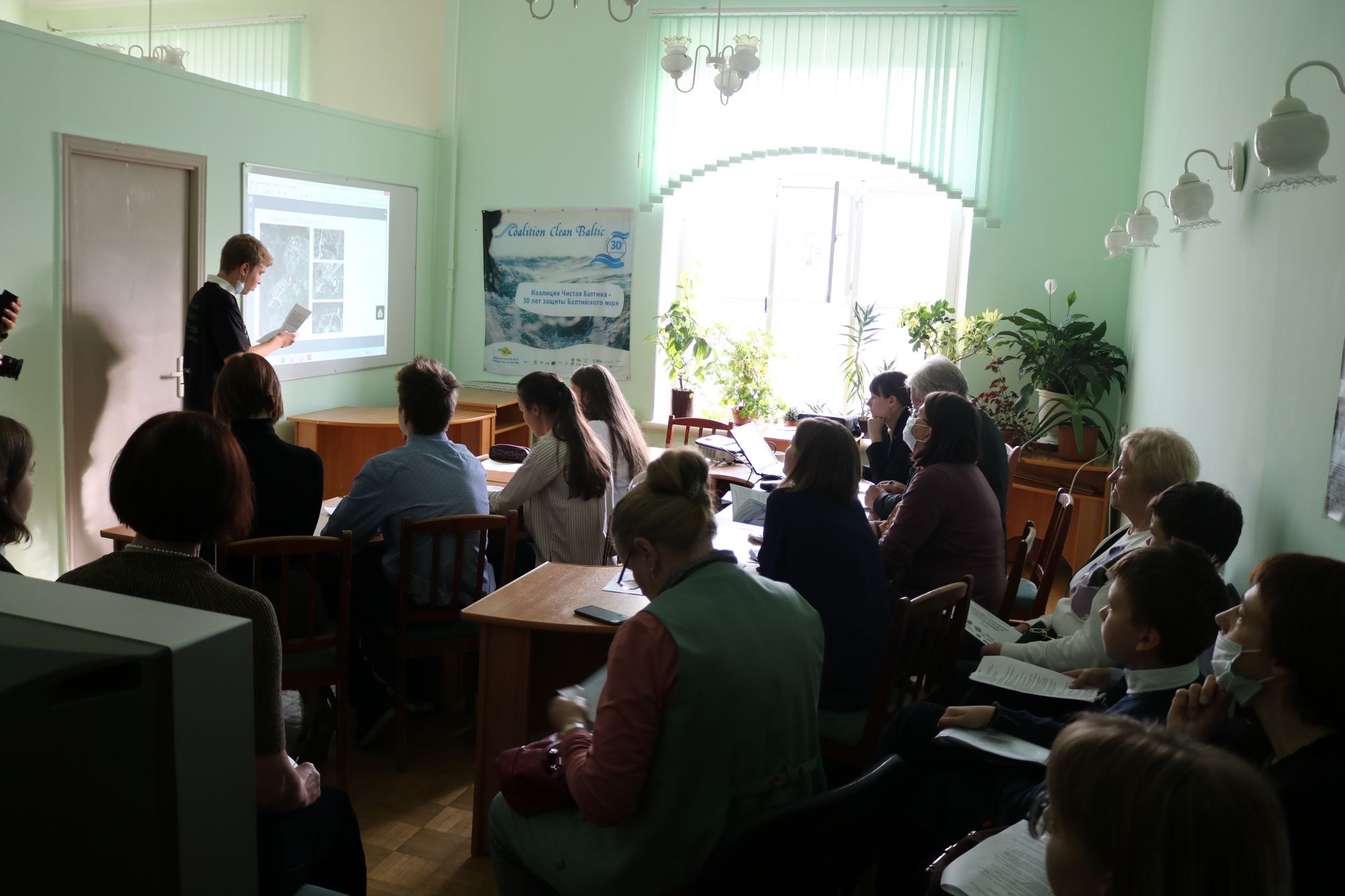 At the section "Clean Rivers – Clean Gulf of Finland", young researchers told about the ecological state of water bodies of the Gulf of Finland basin. Thus, in 6 reservoirs of the Steklyannyy ruchey settlement in Vsevolozhsky district, no toxic algae species were found among the 37 studied, most of the reservoirs were classified as oligosaprobic zone – these are practically clean reservoirs. All the studied tributaries of the Izhora River are polluted, including the Teplaya and Paritsa Rivers, which locals consider clean. Exceedances of MPC were observed here for iron, zinc, nitrogen-nitrates and microbiological indicators. The main reason is the presence of sewage and industrial effluents. 2 of the 4 studied lakes of the reserve "Vyaryamyanselkya Gryada" have a mesotrophic status, which is associated with the breeding of carp in them even before the creation of the reserve, as well as with the impact of recreation centers. The Kaskolovka River and the Luga Bay are polluted with microplastics, environmental education of residents on reducing the formation of plastic waste is required 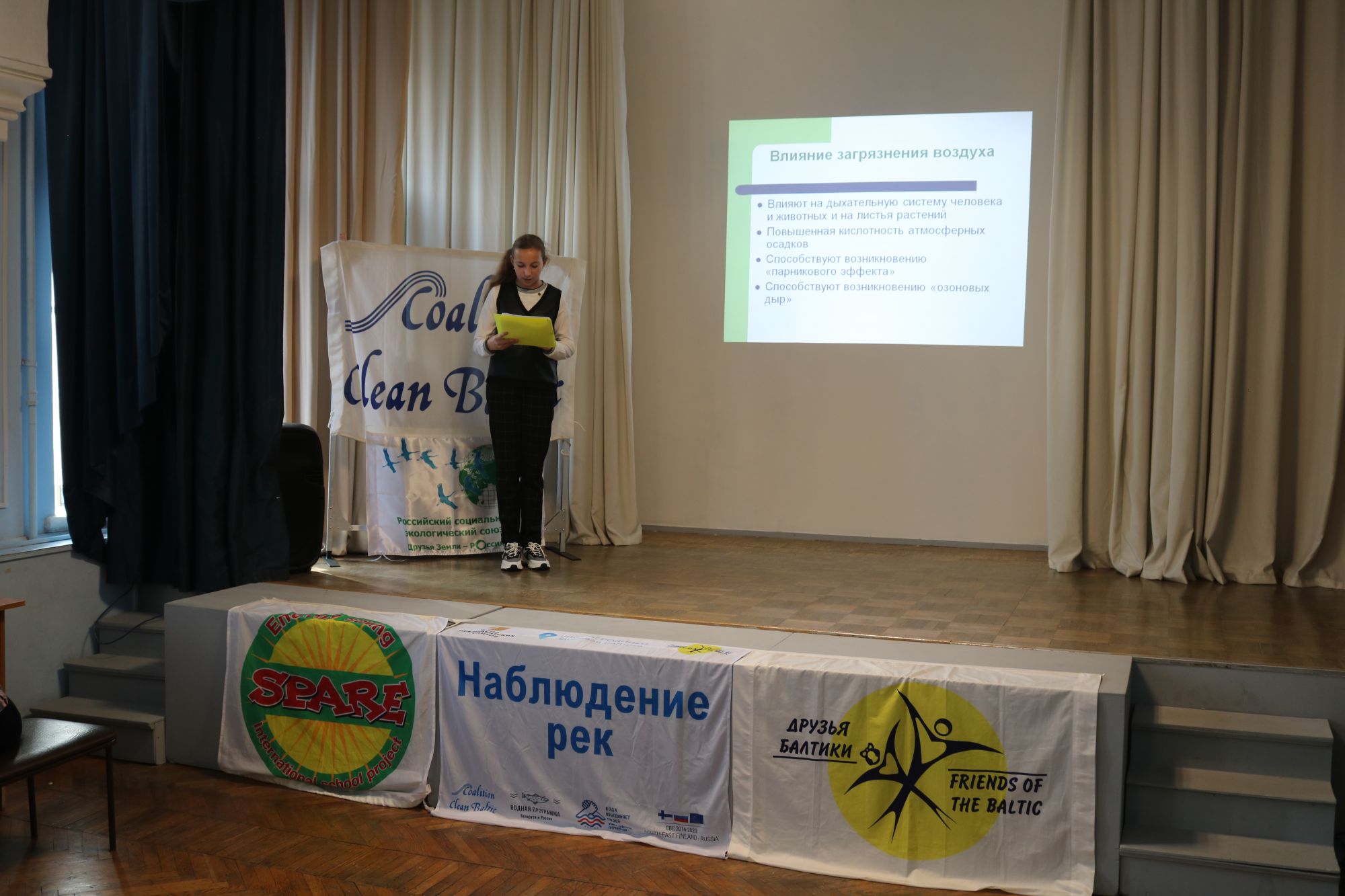 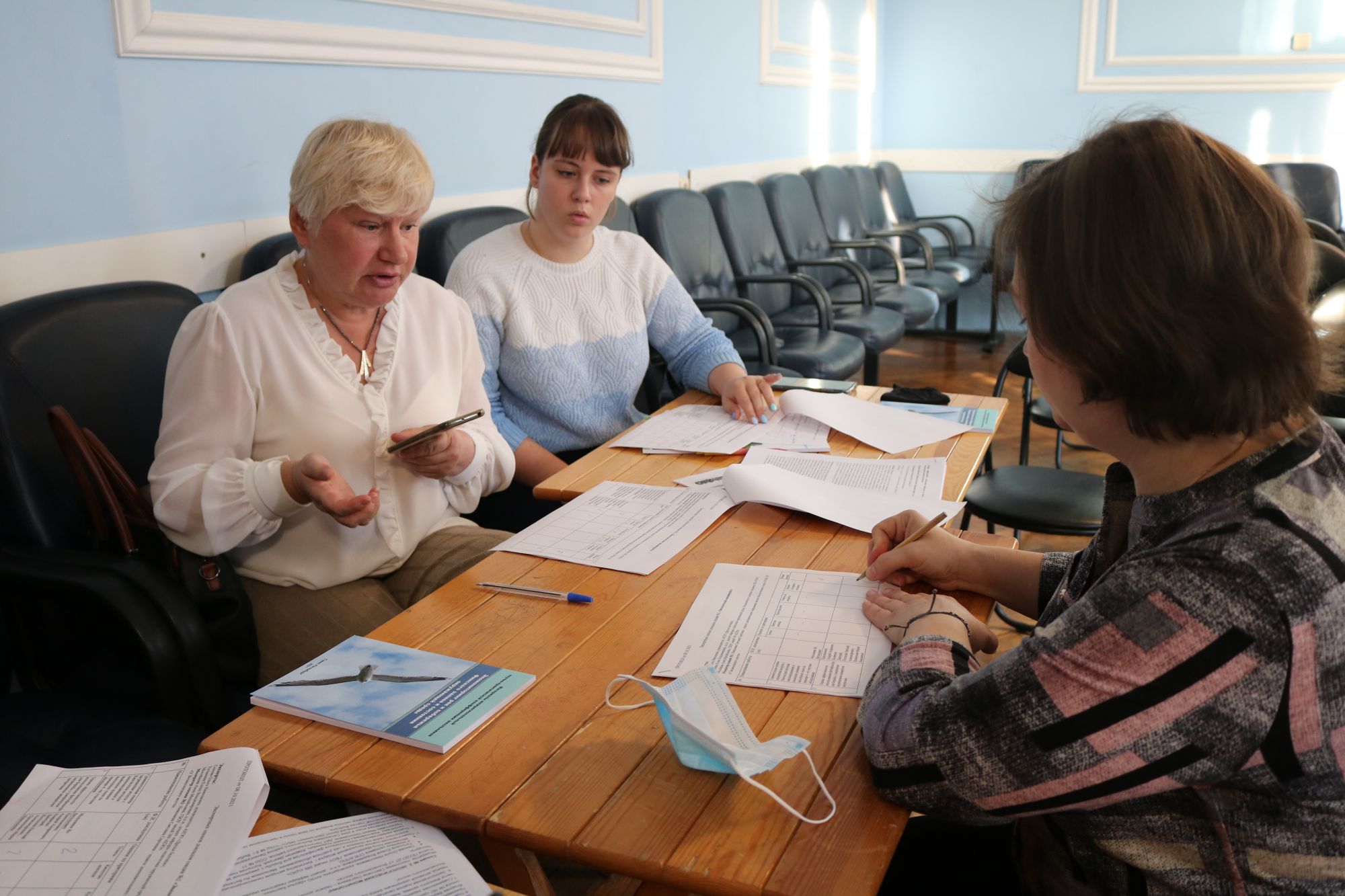 In school studies of the Seleznevka River in the Vyborg district of the Leningrad Region, and the Oredezh and Yashura rivers in the Luga River basin, express tests showed the presence (but not excess) of nitrates, nitrites and phosphates in the water, a lot of household garbage on the banks, which indicates the influence of coastal settlements and the need to educate the population. Studies of the Okkervil River in St. Petersburg by organoleptic methods and rapid tests show a high degree of contamination – industrial facilities and household effluents have been affecting the river for many years. The authors draw attention to the problem through online publications. A study of a high school student based on a comparison of the flows of biogens N and P into the bay from the Neva and its branches in the delta and the small Krasnenkaya and Dudergofka rivers according to open data showed that the contribution of small rivers is hundreds of times less than from the Neva branches, but its accounting is necessary, since hundreds of small rivers and streams flow into the bay. In the study of the types and sources of garbage on the shores of the Gulf of Finland (Tarhovka, Zapadnyy Kotlin, Laskovy beach in Solnechny), the so-called "sewer garbage" was found, not filtered during mechanical cleaning of household waste, also as garbage from vacationers, tires… The conclusion is made about the need for proper disposal of garbage and work with people. The results of studies by Kingisepp students of air quality by bioindication methods - according to the state of lichens and pine needles - indicate pollution near highways. The report on the use of phytofilters for water purification in the aquarium shows that for short periods of time (up to 2 weeks), the effect of nitrate absorption by filters was not detected. 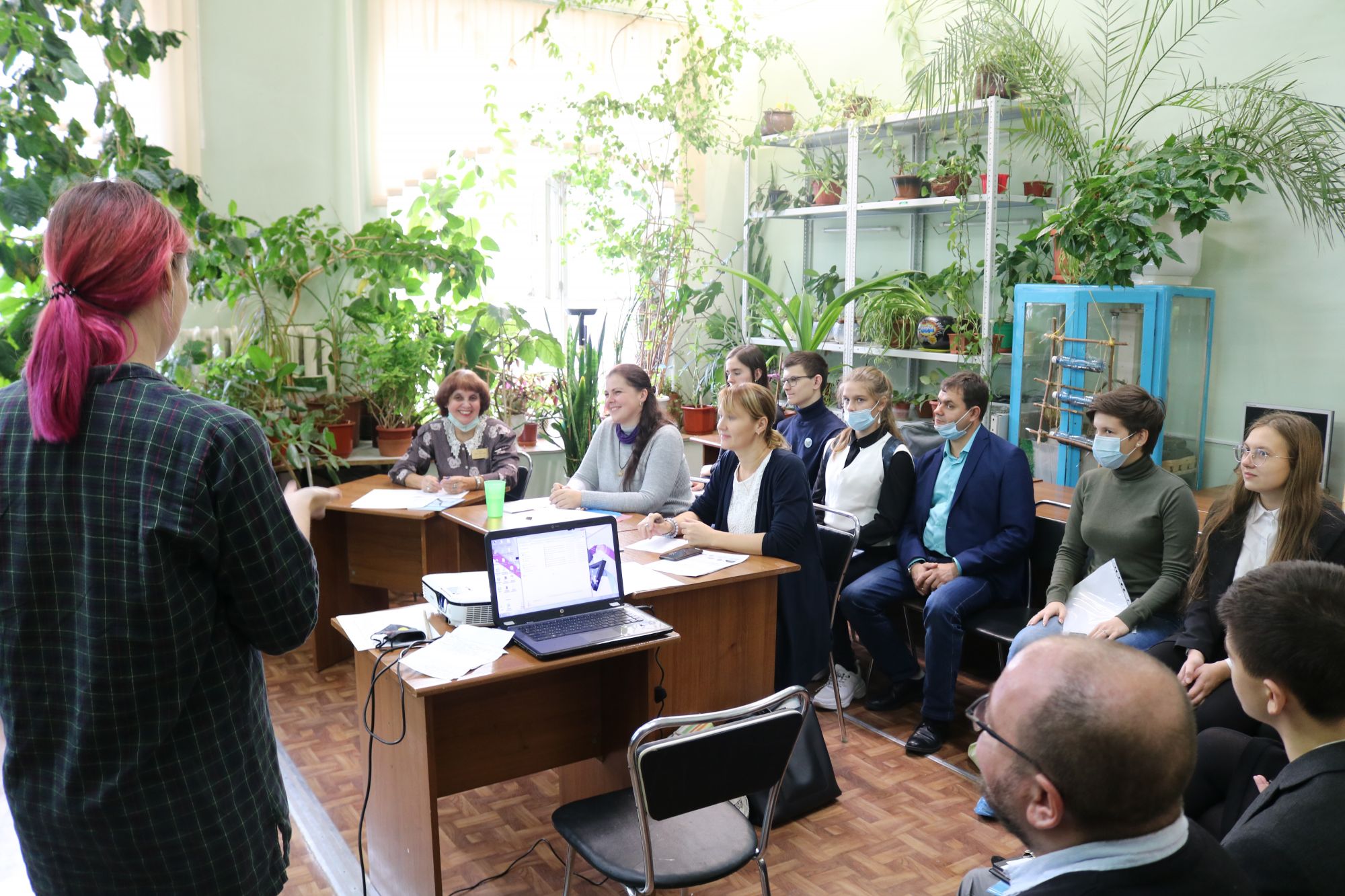 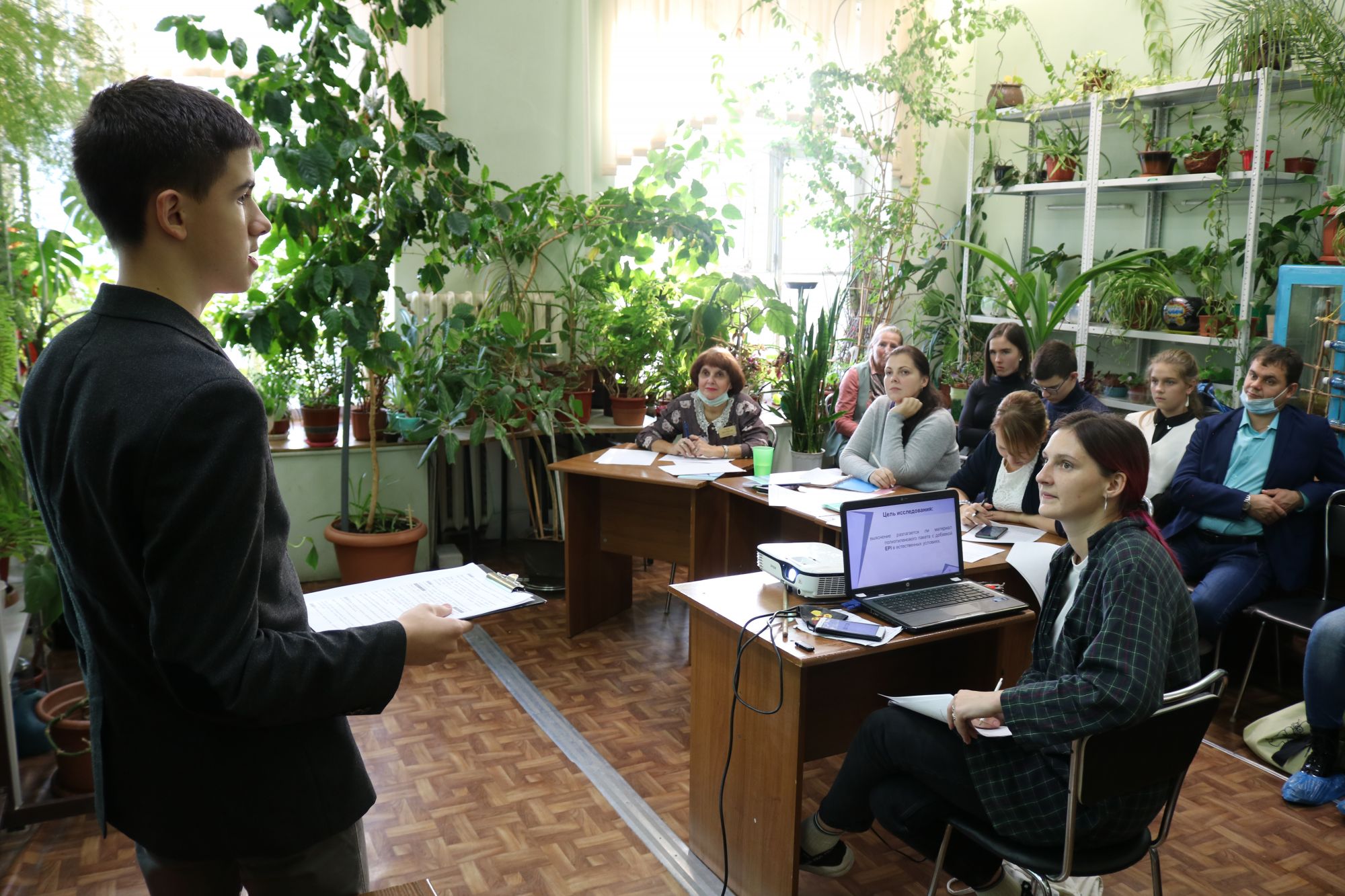 In the section "Actions for the future. Habitat and human health" a lot of attention was paid to solving the problem of plastic pollution. One of the participants has made a study of the cosmetics she uses and found that the concealer contains plastic particles. The winner of the section is the author of a study on the degradation of "oxo-degradable" packages: for four years of observations, the state of the package has hardly changed. Two studies were aimed at studying the quality of water in springs at once. "Membrane and carbon filters are the most effective for purifying spring water from nitrates," one of the works claims. 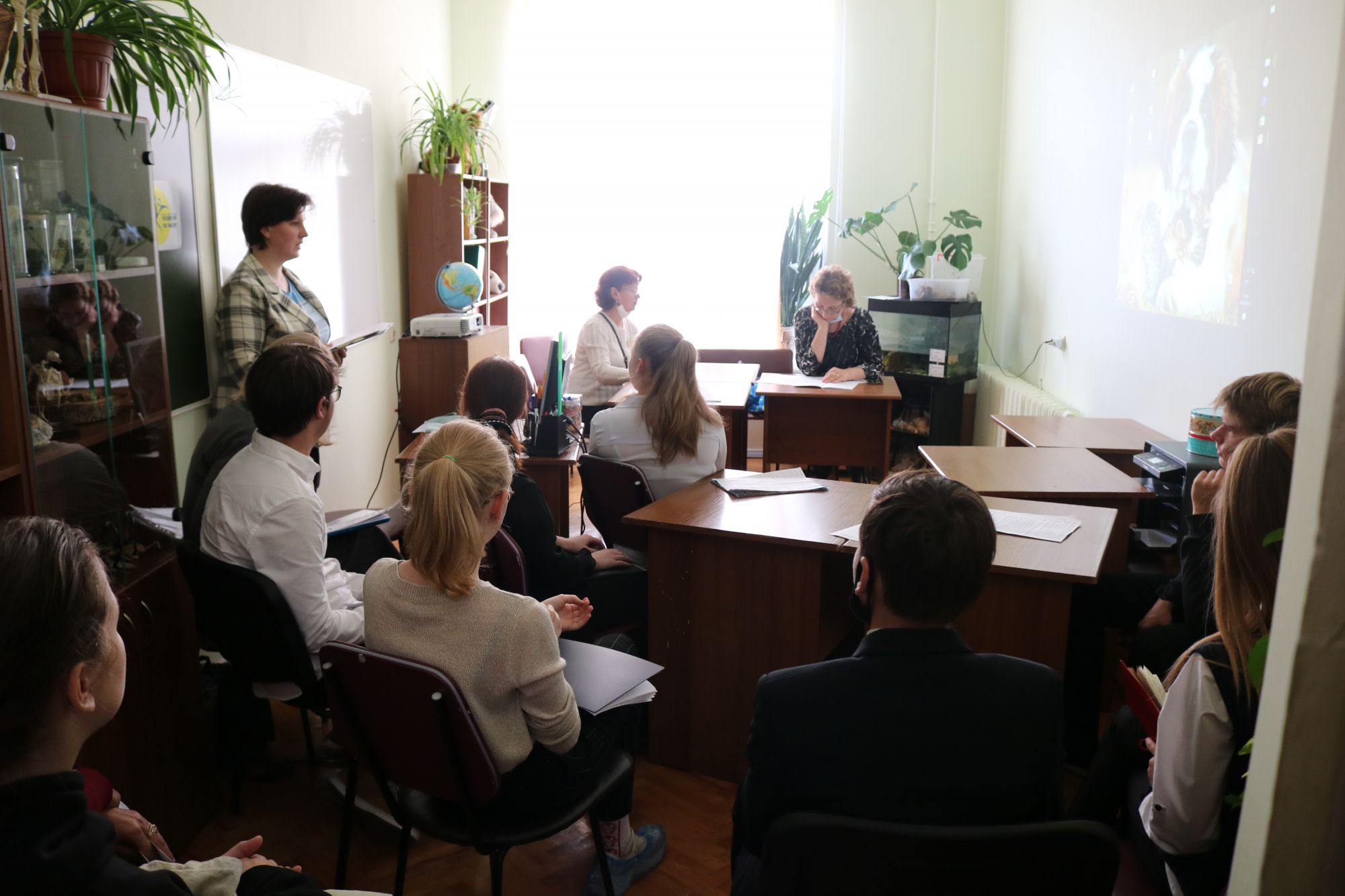 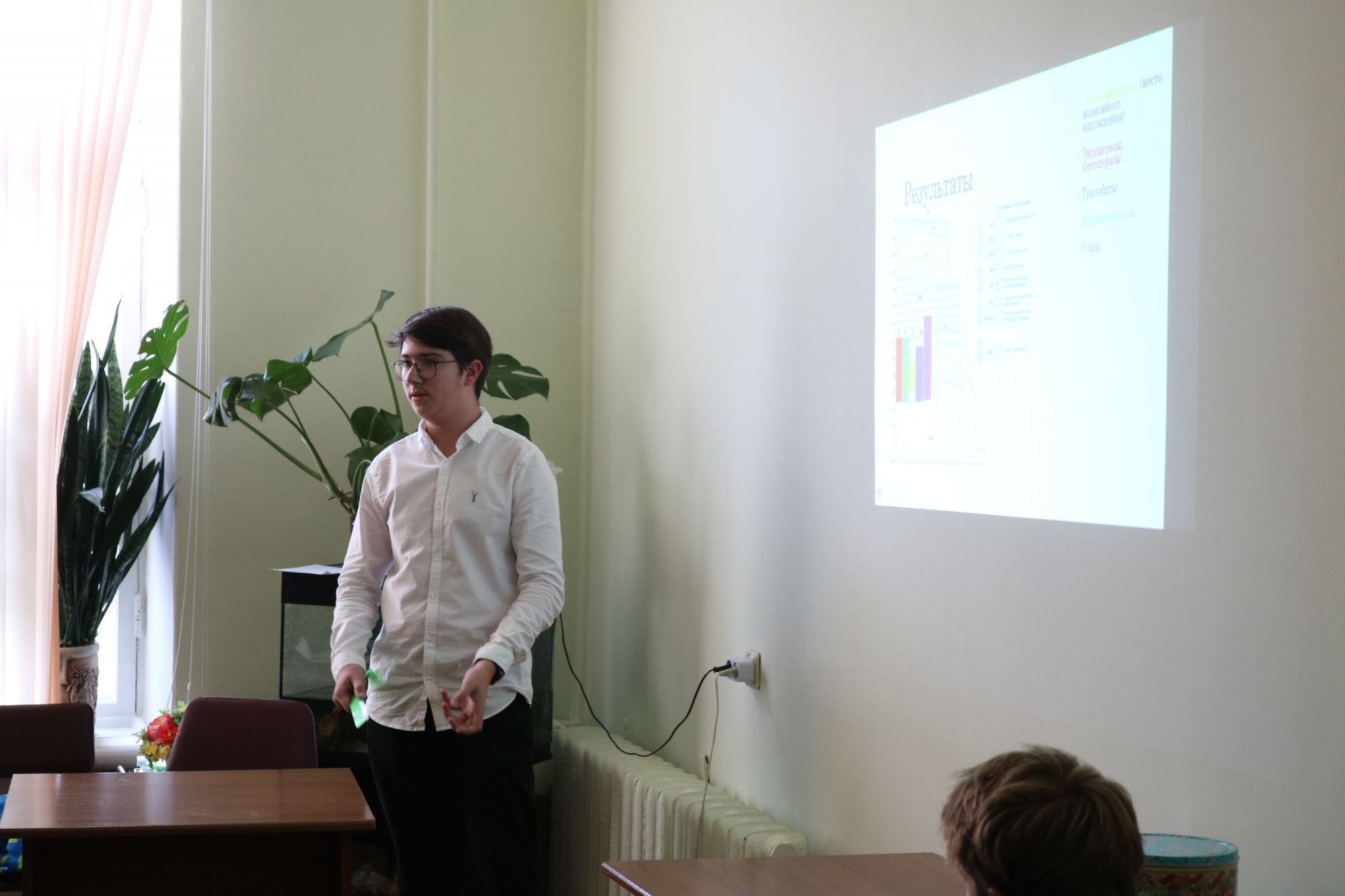 The section "Preserving natural and cultural heritage" presented works dedicated to the conservation of ecosystems and communities of living organisms. For the second year, a resident of Kingisepp has been taking part in the conference, designing an ecological trail in the Romanovka city Park. This year's work is devoted to the study and description of the vegetation of the park, which will allow to determine and clarify the routes along which excursions can be arranged and make thematic excursions. In the work of a participant from the Tsarskoye Selo Gymnasium, the problem of the introduction of Spanish slugs in Pushkin and Pavlovsk is considered and possible environmental consequences are analyzed. Another work in the section tells about paleontological evidence of evolution on the example of geological outcrops of a nature monument of regional significance "Popovka River Valley". The prize-winner of the section is the author of a study of the dependence of the occurrence of trout diseases on water quality.

The online section presented works on various topics: the ecological state of water bodies, energy conservation, lichenoindication, and also raised issues of excessive use of plastic packaging in stores. The winners of the section are: Yegor Lipeyko for his work on the assessment of the ecological state of the Sestra River, where not only studies were conducted on the content of biogens in the water, but also possible sources of pollution were identified; and Sergey Pinchuk for his work on the influence of light as an environmental factor on the performance of cadets of the Suvorov School. The pre-winners of the section are Daria Alekseeva and Nikolai Vagichev. They both, despite their young age, presented strong works, and also showed deep knowledge of the methods and features of their research when answering questions from the jury.

The conference was held with the support of the Education Committee, the project "Water Meets People - Learn, Act and Influence" (SEVIRA) and the Water program in Belarus and Russia of the Coalition Clean Baltic.

The collection of abstracts of the conference reports is available on the Friends of the Baltic website. 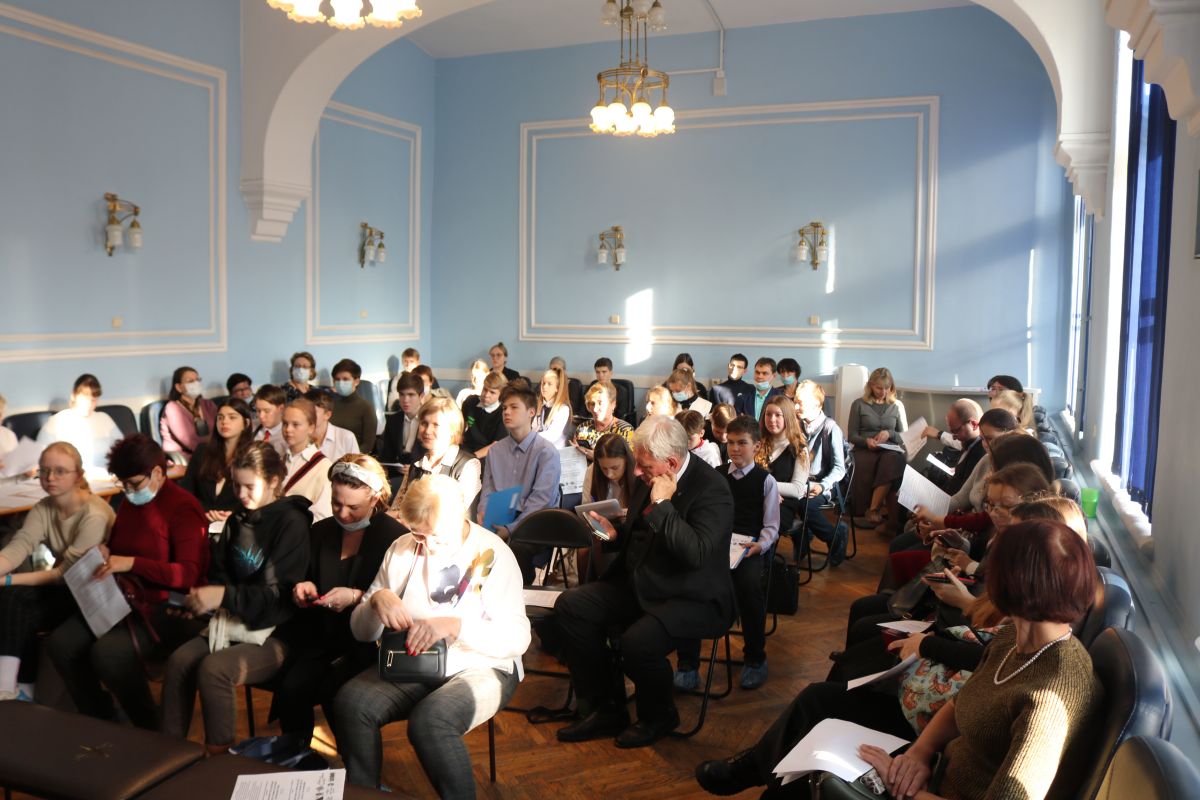 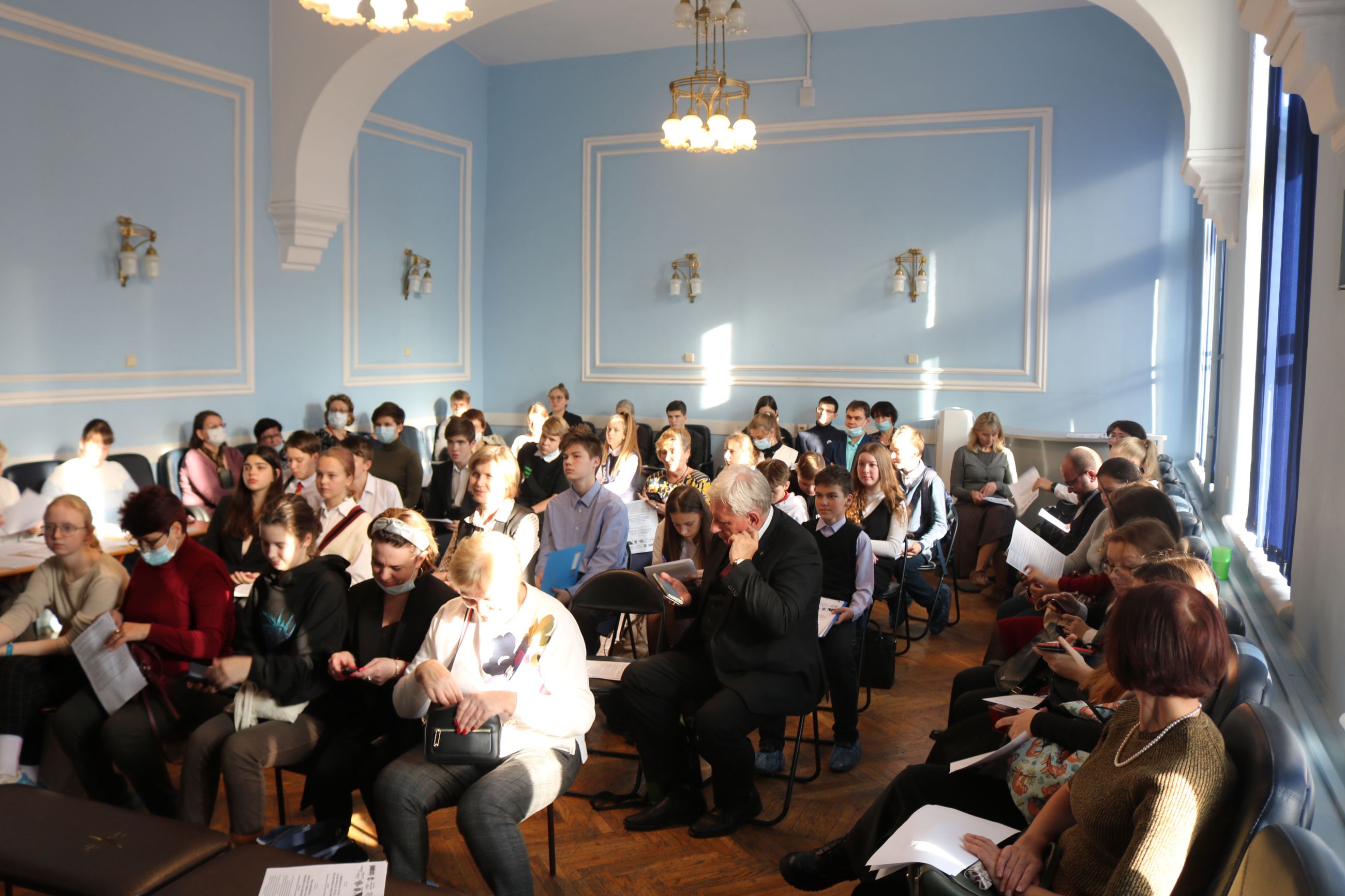 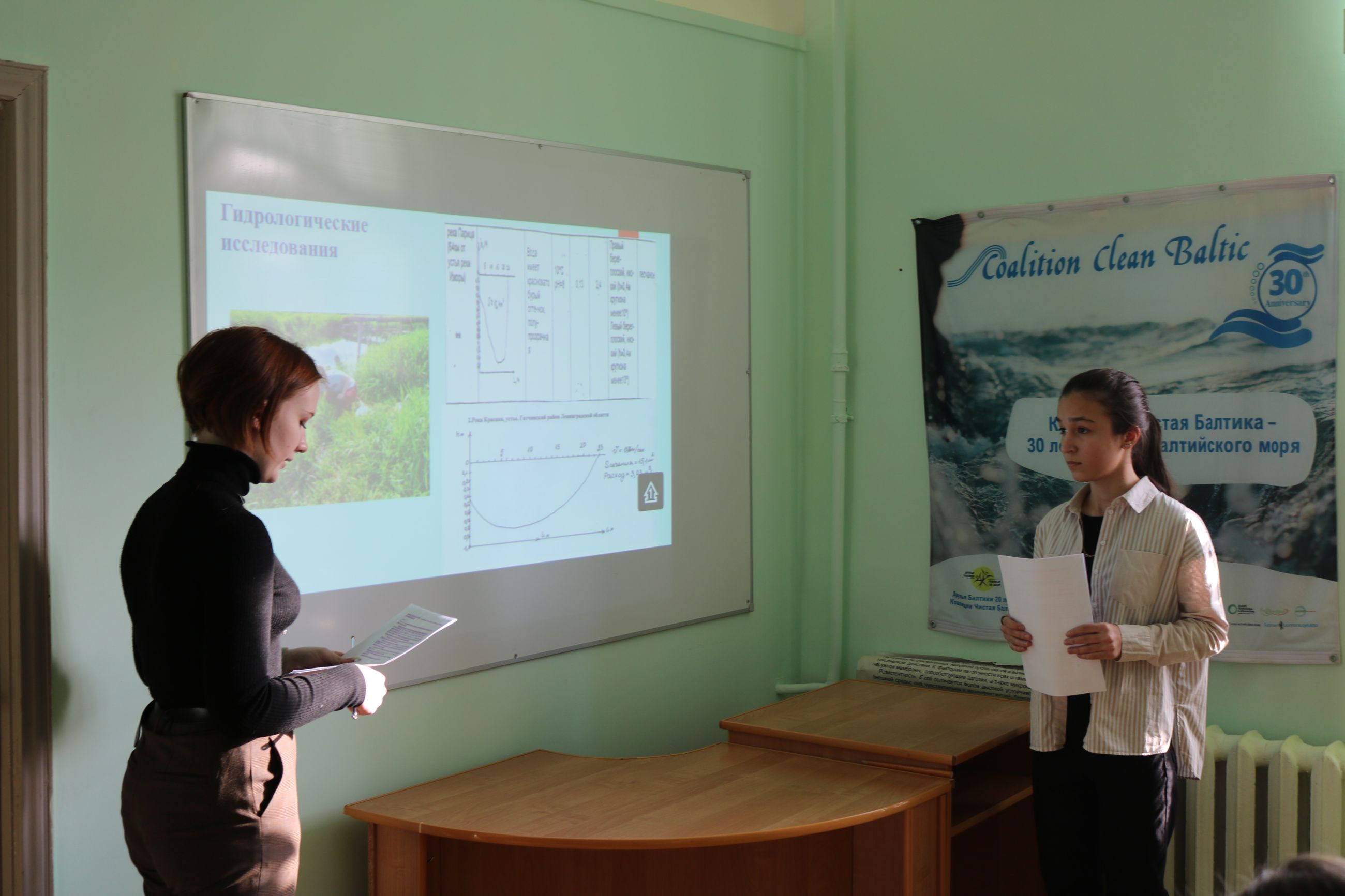 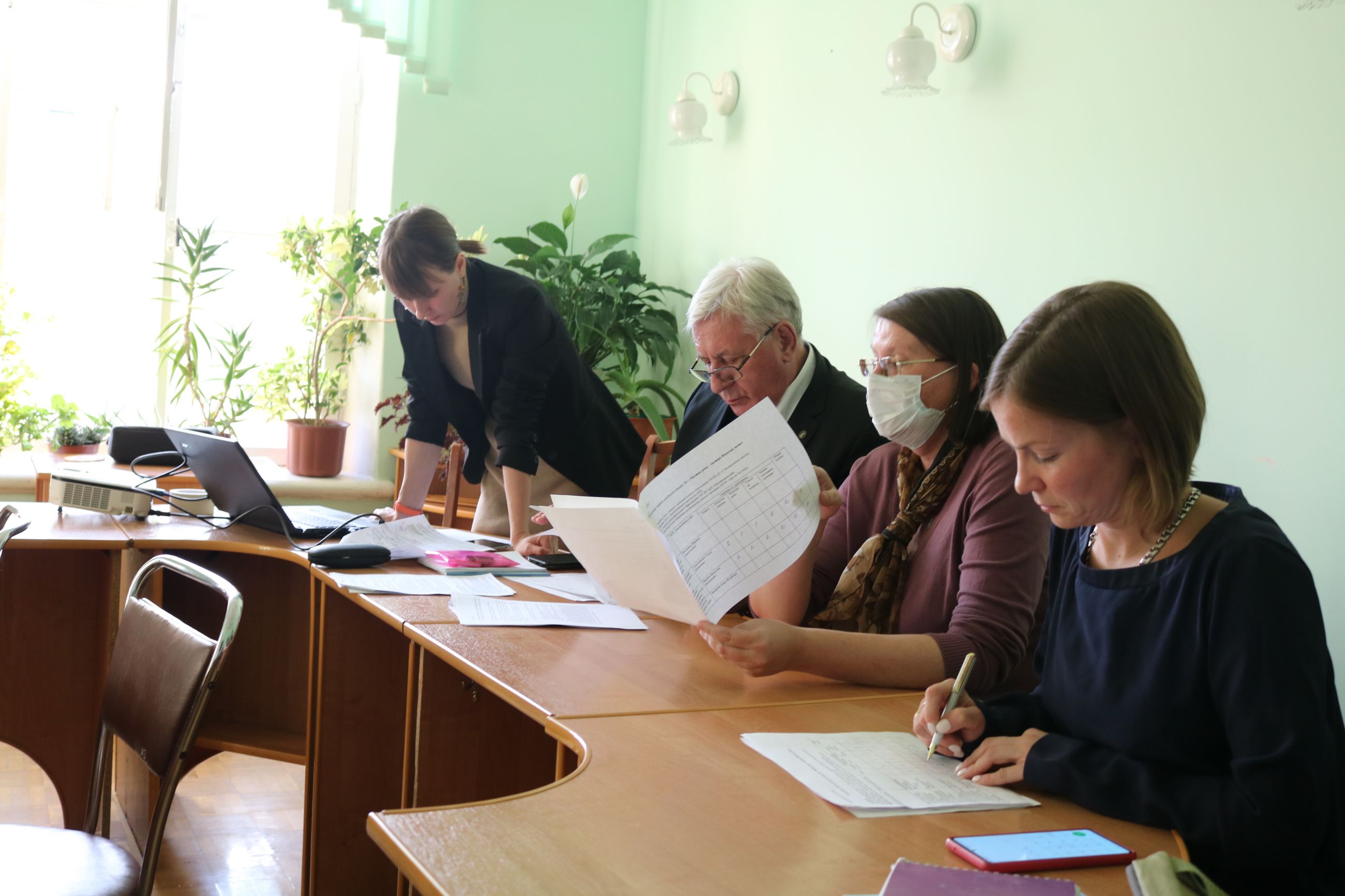 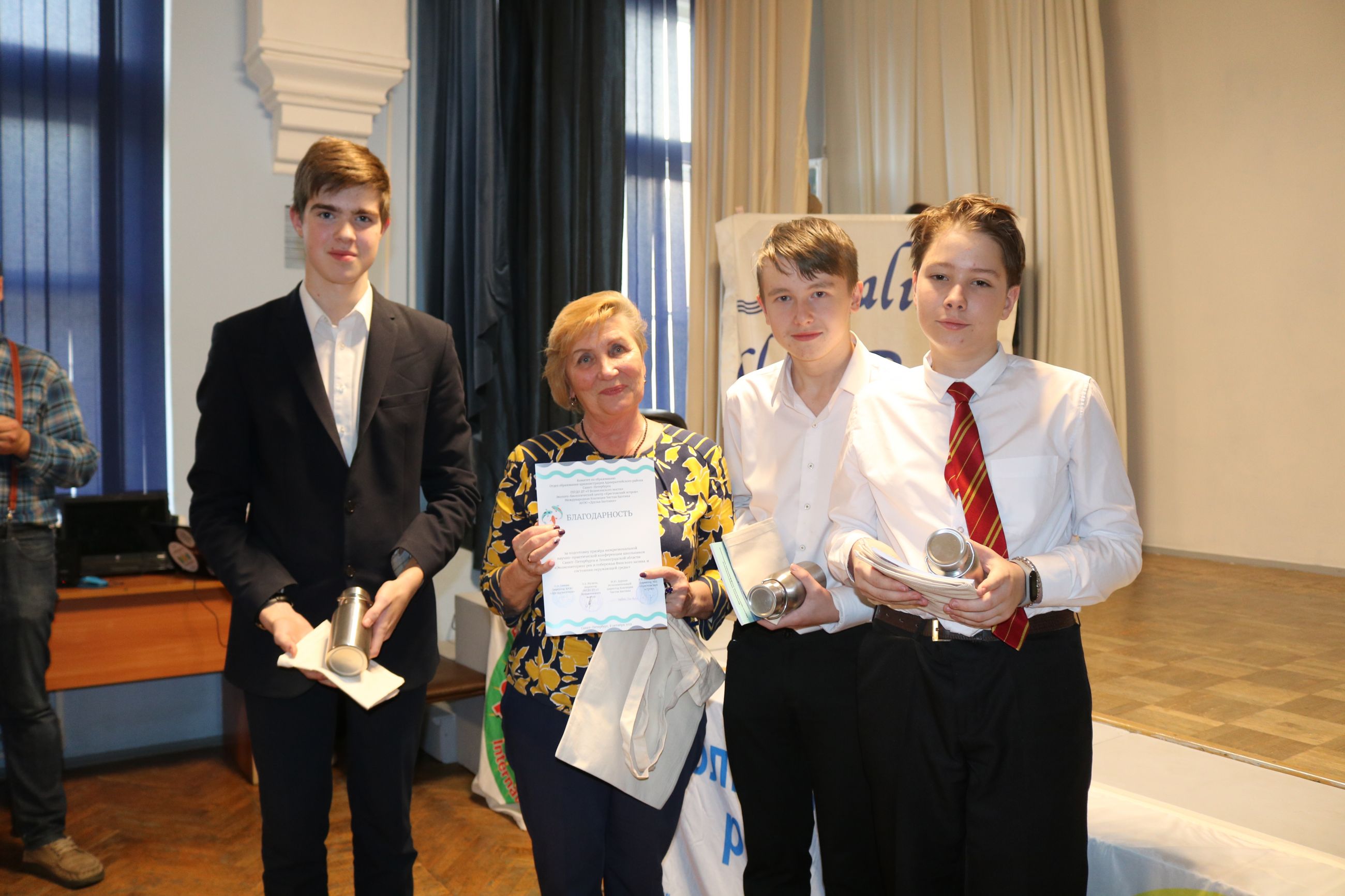 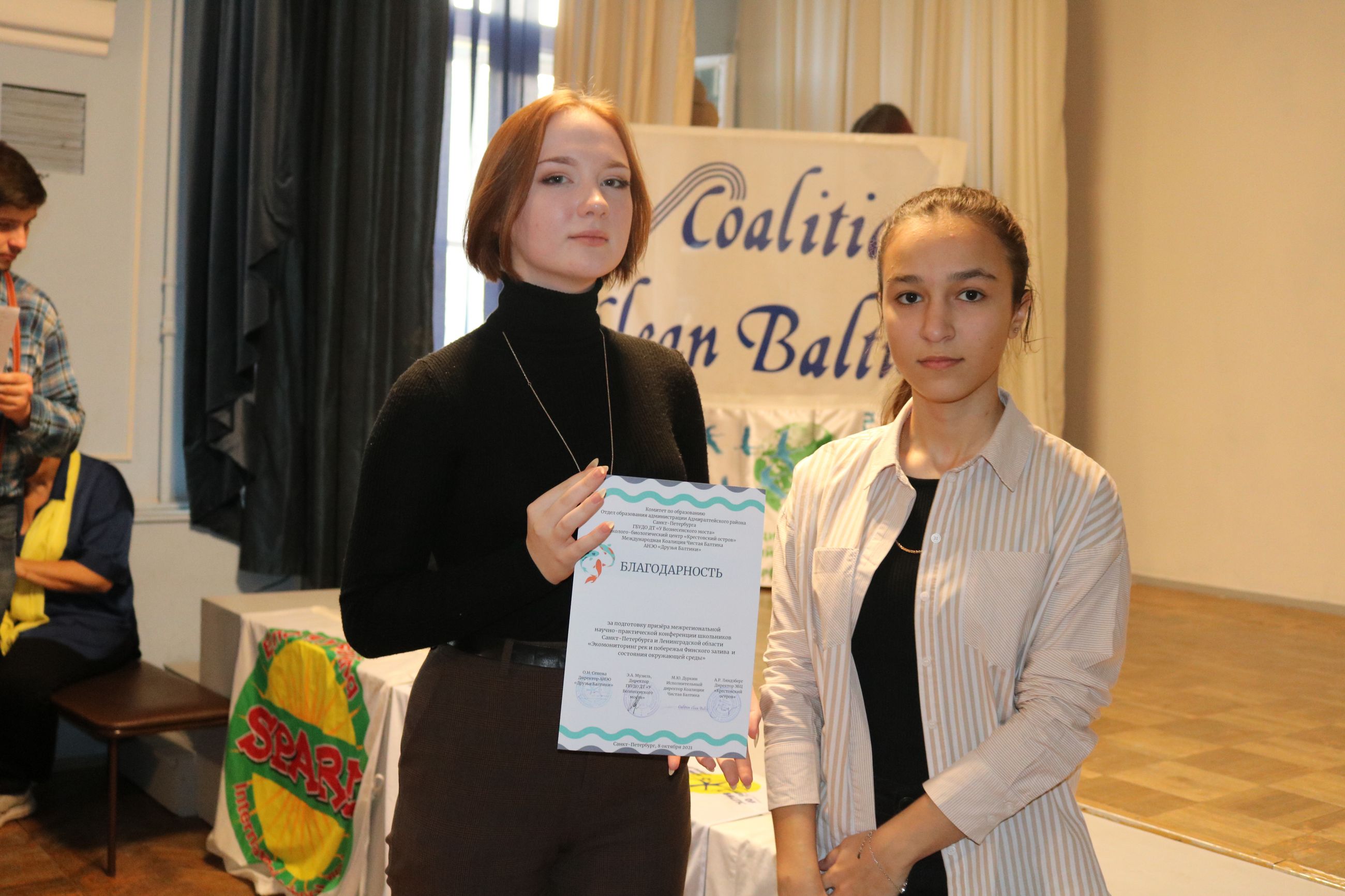 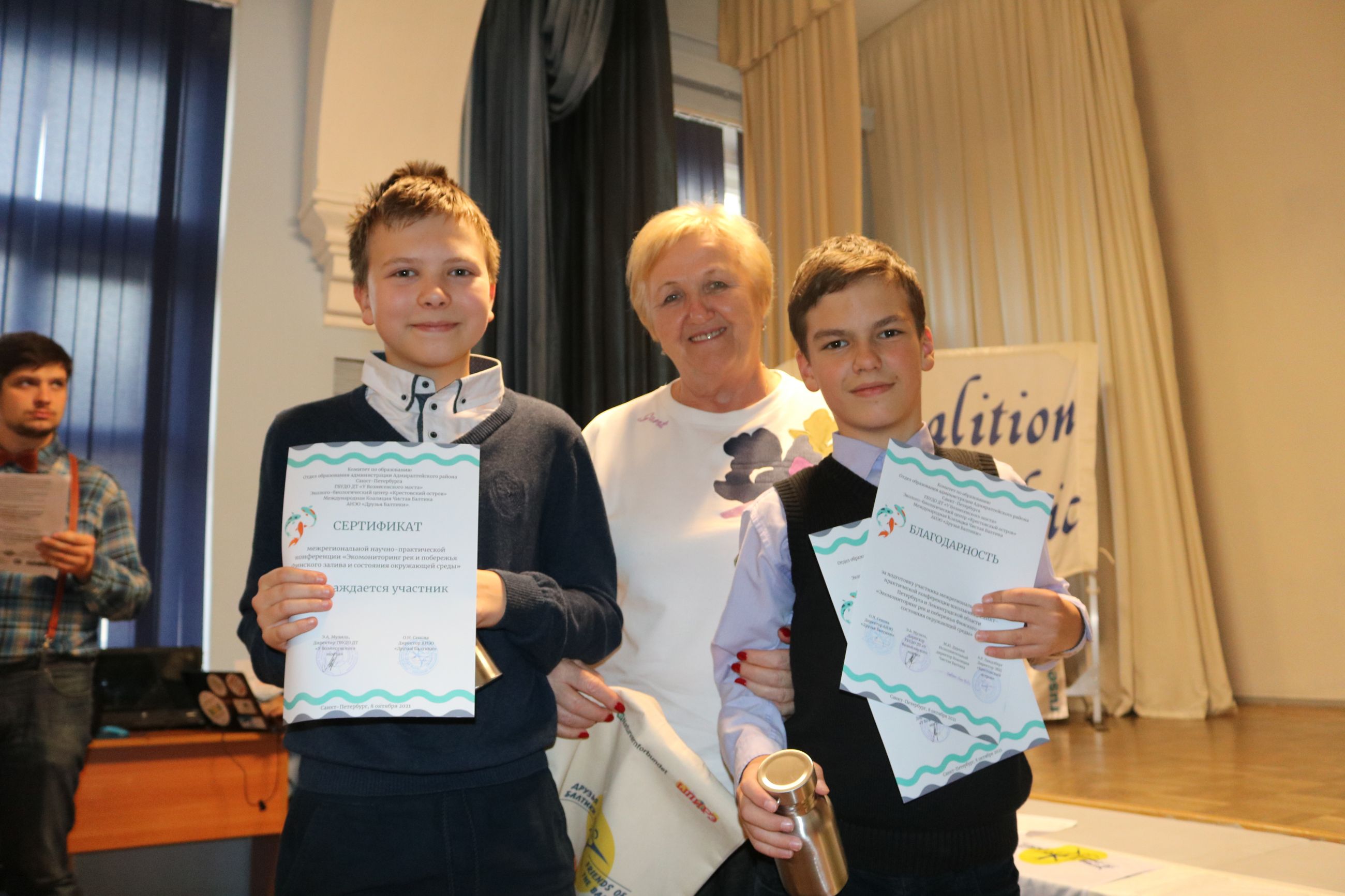