"Friends of the Baltics" together with experts from "North-Western PGO" (Rosgeologiya Holding) reexamined socially significant springs in the Vyborg, Lomonosov, Gatchina, Volosovo, Luga districts of Lenoblast, and the Kurortny and Krasnoselsky districts of St. Petersburg. The research was conducted within the framework of the project "Clean Springs - Healthy Baltica" supported by the Presidential Grant Fund.

According to the data of repeated research - 9 of 30 springs are not suitable for drinking. What are the differences from the results of the first studies and why - reflections in the article.

Of these, 10 springs, which had previously exceeded the content of nitrates, were examined twice during the fall for microbiological indicators - total microbial count, coliform bacteria. Water quality in springs was analyzed according to SanPin 2.1.4.1074-01 "Drinking Water. Hygienic Requirements for Water Quality of Centralized Drinking Water Supply Systems" and SanPin 2.1.4.1175-02 "Hygienic Requirements for Water Quality of Non-Centralized Water Supply Systems. Sanitary Protection of Sources".

Research protocols, photos and descriptions of springs surveyed in the project "Clean Springs - Healthy Baltic" are presented on the Map of Public Monitoring of Natural Waters (layer "Springs") and on the map "Springs of Leningrad region". Black and blue marks on the maps indicate non-potable and potable springs. Black mark is put, if at least at one of the stages of sampling the spring was recognized as non-drinking.

Springs that are an important source of drinking water for the population were selected for the project. The project team had previously examined these springs in the laboratory, and some of them were not suitable for drinking. Northwest PGO, as the main expert partner of the Leningrad Oblast Springs project, examined 375 socially important springs in 2017-2019, and more than 50% of them were found to be contaminated, including by nitrates. At the same time, most of these springs are used by local residents as a permanent source of water supply. "Friends of the Baltic also detected nitrate pollution in springs as part of the River Watch program. Based on this data, the springs were selected for the project "Clean Springs - Healthy Baltics". 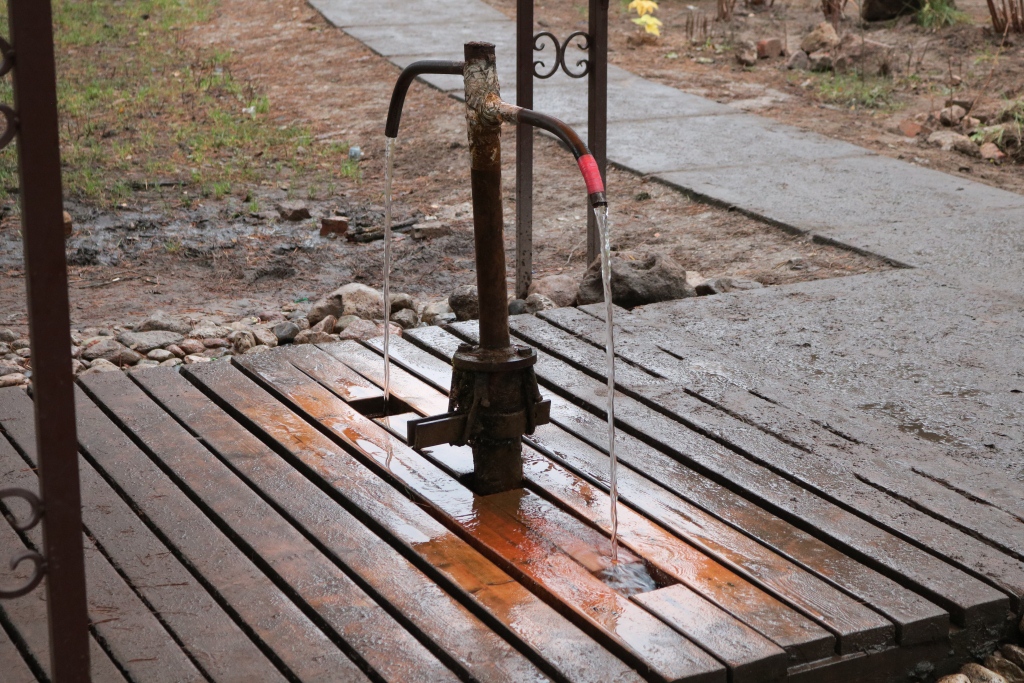 In 7 springs of Vyborg and 3 springs of Luga the pH value was lowered in summer samples, but normal in autumn samples. Water acidity is connected with natural features - soil acidity and peculiarities of precipitation inflow, presence of bogs. Iron content is increased in autumn samples in two springs, where in summer samples iron content was normal. The presence of iron is determined by natural features - the composition of soils and rocks.

Four springs in the Lomonosov district of Leningrad Region and two springs in the Krasnoselsky district of St. Petersburg repeatedly showed increased hardness, in five of them even higher than in summer. Exceeding the standard of mineralization was observed during repeated sampling in three of these springs. Exceeding the standard for hardness in this area may be due to natural conditions - the springs are located on the Izhorsky plateau or at its base, the plateau is composed of carbonate rocks, limestone and marl, saturated with calcium. If there is a discrepancy SanPin for these indicators, the water is not recognized as drinking water, as regular consumption of such water without additional treatment can be dangerous to health.

It is possible to slightly increase the acidity and lower the water hardness by boiling.
An excessive concentration of nitrates was detected in 4 of 30 springs - in Villozi, Gryazno, Globitsy, and B. Izhora. High content of nitrates is related to agricultural effluents (manure storage, fertilizer application) and untreated domestic sewage. It is important to identify the source of pollution - this is also one of the tasks of the project "Clean Springs - Healthy Baltica". Water with high nitrate content, even if the concentration is lower than normal, is not recommended to drink regularly. Long-term consumption of water with high nitrate content is dangerous for infants and elderly people and can cause endocrine system disorders and cancer.

Identification of springs unfit for drinking, differences in the indicators of water quality in springs in different seasons and the use of springs by the population as a source of permanent water supply, indicates the need for regular monitoring of water quality in socially important springs. However, springs are not included in the state water register and the system of natural water monitoring.

"Friends of the Baltic" together with "North-Western PGO" (Holding "Rosgeologiya") appealed to the deputies of the Leningrad Oblast Parliament with the initiative to include socially significant springs in the water register, monitoring springs as sources of centralized water supply, informing the population. We also sent a letter to the Committee on Natural Resources of the Leningrad region with a proposal to include socially significant springs in the state water registry - as a first step towards the inclusion of springs in the monitoring system. The results of the review will be reported separately. 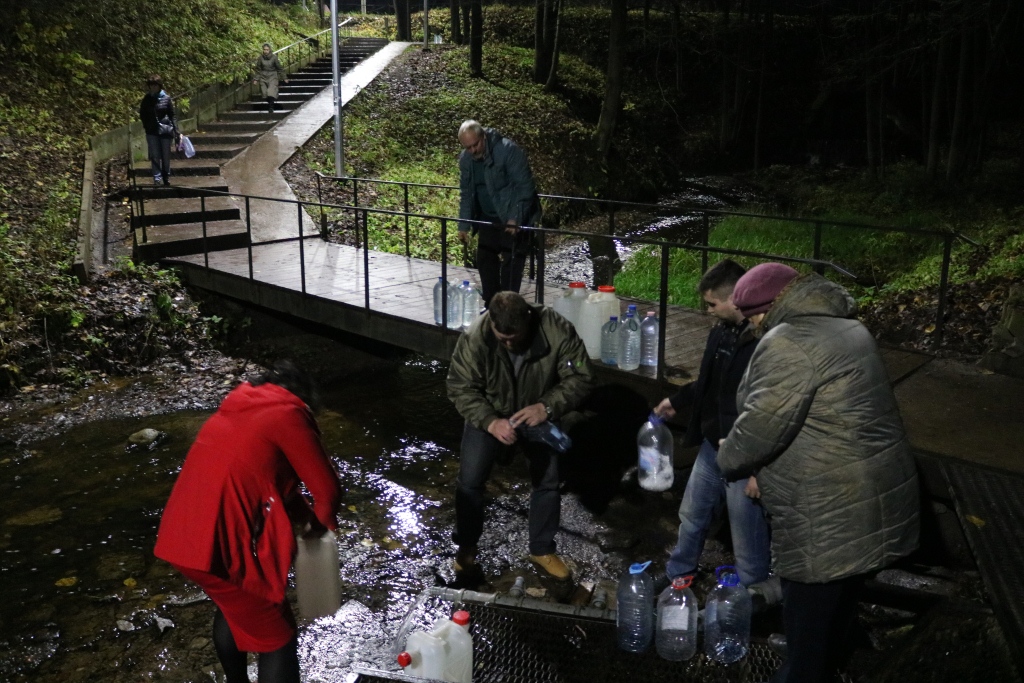 In 6 springs of Vyborg district, located in Gavrilovo, SNT "Druzhba", Vysotsk, Glebychevo, Primorsk, Roshchino, in autumn samples water is normal according to 20 indicators. Acidity index (pH) in them was lower in summer, but in autumn it was 6-6.6 within the norm (6-9). A popular spring in the Scandinavskiy microdistrict in Vyborg had a turbidity of 3.4 EMF, which was higher than the norm for a centralized water supply source (2.6 EMF). An excess of total iron concentration was also detected at 0.631 mg/l, while the norm was 0.3 mg/l. In this spring in summer there was only low pH, other indicators were normal.

Nitrate ions were detected in small amounts in all springs of the district, their maximum content, as in summer, was found in the spring of Primorsk, 36 mg/l, the norm being 45 mg/l, which may indicate a constant source of nitrates in groundwater, such as washing off fertilizers from agricultural areas. Concentration of oil products in all springs is below the maximum permissible concentration of 0.1 mg/l, but in the spring in the settlement of Gavrilovo it is close to MPC - 0.08 mg/l.

In summer analysis a similar concentration was detected in the spring in Glebychevo. Occasional presence of petroleum products in these springs may indicate the presence of pollution sources.

In the Lomonosov district 8 springs were tested. The springs in Soikino, Lebyazhie, and the radon spring in Lopukhinka were considered potable, with 20 normal water quality indicators, the same as in the summer samples. Spring in Villozi has increased mineralization (1060 vs. 1000 mg/l) and hardness (9.5 vs. 7 mg-eq/l), nitrate levels are high but slightly below the maximum allowable concentration. Nitrates, iron and hardness exceeded the norm in the summer sample. In two springs in Ropsha, hardness was again higher than the norm, as in summer samples - 7.6 and 7.7, while the norm was up to 7. Globitsy spring was analyzed twice during the fall, both times hardness exceeded the standard, 7.4 and 8.4 mg-eq/l, nitrates were within the MPC level of 44 and 37 mg/l, other levels were normal.  Significant content of nitrates indicates the presence of a pollution source. Analysis was also conducted twice in the spring in Bolshaya Izhora during autumn, the first sampling revealed low pH of 5.7, while the norm was 6-9 and the nitrate content was 45 mg/l with maximum permissible concentration of 45. In the repeated sample, the nitrate content was 41 mg/l. That is, there is also a source of nitrate pollution here.

In St. Panteleimon's spring in Kalozhitsy (Volosovsky District) water corresponds to drinking water quality according to 20 indicators, the values of the indicators are similar to those in the summer sample.

In Luzhskiy district 7 springs, which were also tested in summer, were tested according to 20 chemical indicators. Four of them were checked twice in autumn according to microbiological indicators. A spring in Shalovo, one of the most popular springs in Luga, did not comply with the standards of drinking water quality according to the indicator total iron - 0,344 mg/l, the standard being not more than 0,3 mg/l. Residents also said that there is a taste of iron. At the same time, in the summer sample, iron content was close to the limit value - 0.297 mg/l.

Water in the springs in Gorodok and Osmino corresponds to drinking water quality according to 20 indicators. At the same time, in summer samples in three of these springs, the value of acidity (pH) was below the norm.

Water in the spring (St. Istochnik) in Turovo and in three springs near the Naplatinka river is normal according to all chemical indicators, as well as in summer. No microorganisms were detected in microbiology either. Drinking water.

Two springs in Gatchina district have been tested twice during the fall period for chemical and microbiological indicators - in the v. Rozhdestvenno and v. Gryazno.  Earlier in the studies of JSC "North-Western PGO" in the project "Springs of the Leningrad region" in these springs there was an increased content of nitrates. In the spring in the village of Gryazno, this result was confirmed - in both samples, the nitrate content was significantly higher than the MPC - 67 and 59 mg/l. In one of the samples, high hardness was determined - 7.4 while the norm was 7. All indicators, including microbiological ones, were normal in the Rozhdestvenno spring.

In the Kurortny district of St. Petersburg, a spring in Zelenogorsk was re-examined. In the summer sample increased chromaticity was detected, in the fall sample all chemical parameters were normal. In the fall, two springs in Sestroretsk were examined twice for chemical and microbiological parameters. Both springs had a reduced pH value in samples in October, in samples in November - pH was normal.

In one of the springs, located at the end of Naberezhnaya street of Sestra river, OCD (presence of coliform bacteria) was 3 in the November sample with the norm - absence. That is, this spring also does not correspond to the microbiological indicator of the drinking water in one of the samples.