100,000 votes collected in the ROI against incineration and for the transition to "zero waste" 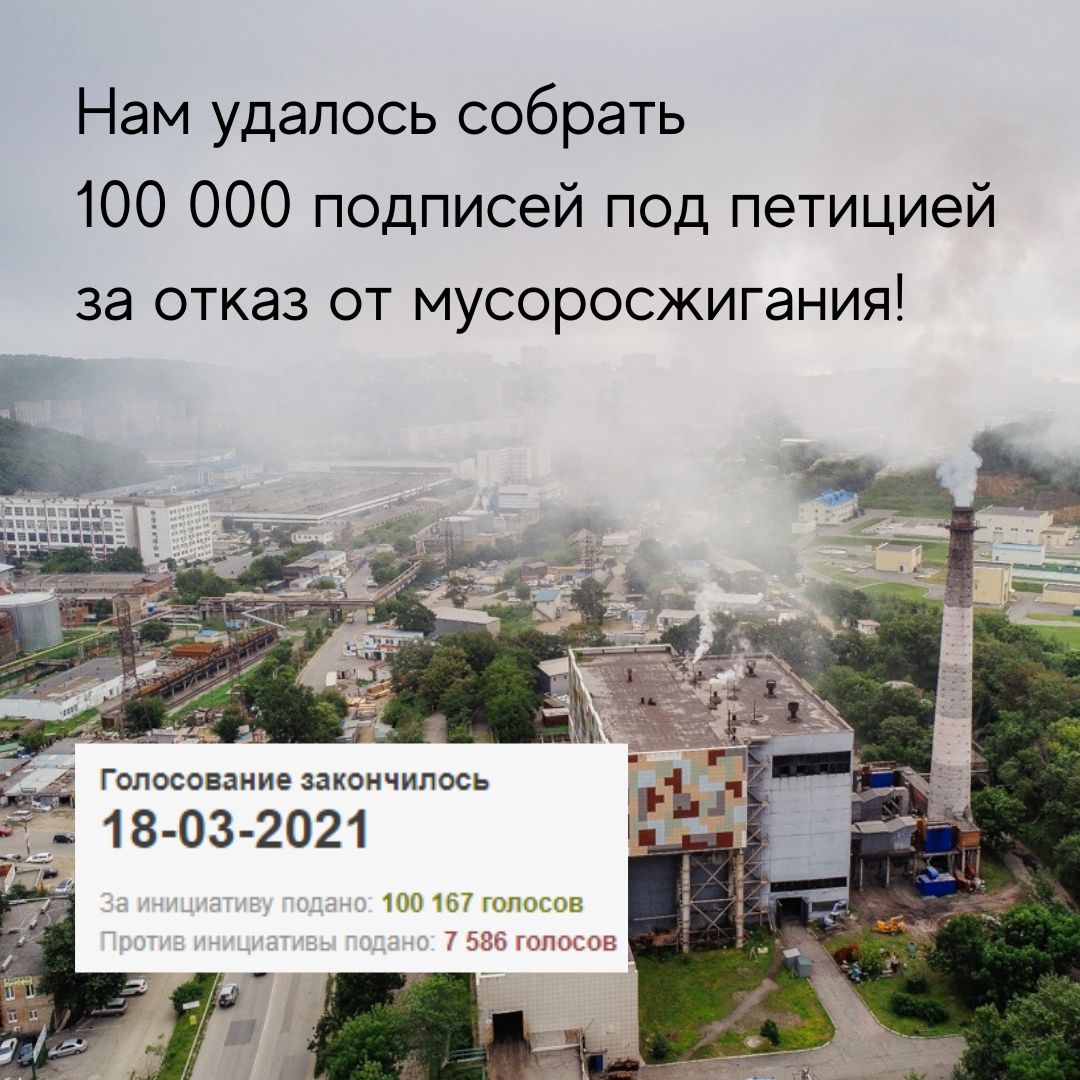 Friends of the Baltic congratulate all involved with the fact that on the website of the Russian Public Initiative 100 thousand Russians have left their votes under the initiative "For refusal from garbage incineration and for prevention of waste formation". According to the presidential decree, the initiative will now be considered by an expert group under the government, which will have to determine the best way to implement the proposals or reject them.

The authors of the initiative are the Alliance against Waste Incineration and Recycling, which includes non-governmental organizations: "Friends of the Baltic Sea", Russian branch of Greenpeace, Association "RazDelniy Collection", Movement "EKA", Ecocenter Dront and Resource Conservation Center.

In the petition the authors analyze the reasons why the garbage reform in Russia has reached a deadlock and offer system solutions and amendments to the legislation to make the reform move towards real solutions to the waste problem.

One of the key reasons is the non-compliance with the priority of waste prevention and recycling over burial and incineration enshrined in Russian law at all levels of government, with no accountability or punishment for this.  In addition, in December 2019, amendments were made to No. 89-FZ "About waste," which equated waste incineration with waste recycling. The law introduced the concept of "energy recycling" (in essence, incineration with energy generation), which opened up opportunities for large-scale spending, including budget funds, on the construction of environmentally dangerous incinerators instead of supporting existing recycling plants. The construction of the first 4 plants in Moscow Region and the first one in Kazan is in the beginning, and there are plans to build 25 more plants all over Russia.

What is proposed in the initiative on the ROI, which collected 100 thousand votes:

During the collection of votes, the initiators of the petition faced the manipulation of votes against the petition (by buying votes against, hacking into user accounts on Gosudlugi). The Alliance against Waste Incineration and Recycling appealed to the law enforcement authorities and to the fund-operator of ROI on this matter.

"We are glad that civil society united and the petition collected the necessary number of votes, but this is not the end of the work. Now we have to convey the opinion of a hundred thousand people to the government and defend our right to an incinerator-free and plastic-free Russia," comments Elizaveta Merinova, program manager of Friends of the Baltic and co-chairwoman of the Russian Socio-Ecological Union.

Recently, Deputy Prime Minister Victoria Abramchenko criticized plans to build 25 incinerators, calling them "platinum" for the fact that they are "actually proposed to pay from the federal budget and the rate for the population (for electricity or garbage disposal). She also pointed out the unsustainability of MSPs due to "a significant increase in greenhouse gas emissions. Deputy Prime Minister advocated the creation of a cyclical system in which waste is used as a secondary material resource.

The other day Abramchenko declared that we should not be afraid "to prohibit the use, application, release into circulation of non-recyclable materials such as colored plastic, hard-to-recycle materials such as cocktail sticks, disposable tableware and so on. This is not a novelty; many countries around the world are already moving toward banning non-recyclable materials (the EU, for example)." She pointed out that "we have to stimulate recycling with the extraction of secondary material resources, move to the separate accumulation of solid waste".

The initiators of the petition hope that the 100 thousand votes collected on the ROI will help the government to move faster to the implementation of the above mentioned.